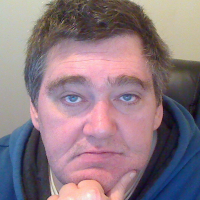 Which is darker A or B? Look to the right for an answer.

There is something to be said about how the human brain interprets everything in this picture. On its surface it’s a picture of a gray and darker gray checkerboard with a cylinder sitting upon it with a shadow being thrown upon the checkerboard. The mind perceives the two squares as different colors. It logically expects them to be different as a result of the concrete pattern established in the checkerboard itself. Because the change in color is introduced equally across all squares on the checkerboard until the color in lighter gray square is equal to that of the darker dray square with a gradient that mimics a shadow, the mind if deceived into believing that the two squares are different shades of gray. If you see a gradient (if you do they’ll be ever changing) in either of the two stripes inside the right picture, that’s just your mind trying to rationalize the illogical by reevaluating and subtly filling in what can be perceived as logical. It’s a flaw in logic, not in your eyes.